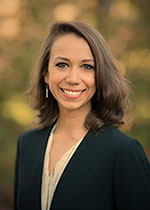 Christina Snider serves as Tribal Affairs Secretary to Governor Gavin Newsom and leads the Governor’s Office of Tribal Affairs established within the Office of Governor Gavin Newsom on July 1, 2022. Snider was appointed February 19, 2019 by Governor Newsom to continue her service in the Governor’s Office following her appointment on February 6, 2018 by Governor Edmund G. Brown Jr. On July 1, 2020, Snider has also previously served as Executive Secretary of the California Native American Heritage Commission, appointed by Governors Newsom and Brown. She is an enrolled member of the Dry Creek Rancheria Band of Pomo Indians.

Christina received her law degree from the University of California, Los Angeles in 2013 and is licensed to practice law in California and the District of Columbia. She has extensive experience in tribal law and policy, having worked with the United States Department of Justice Office of Tribal Justice, the National Congress of American Indians, the California Native American Heritage Commission, and several tribal governments and organizations across the nation. Christina received her Bachelor’s Degree in History from the University of California, Los Angeles.